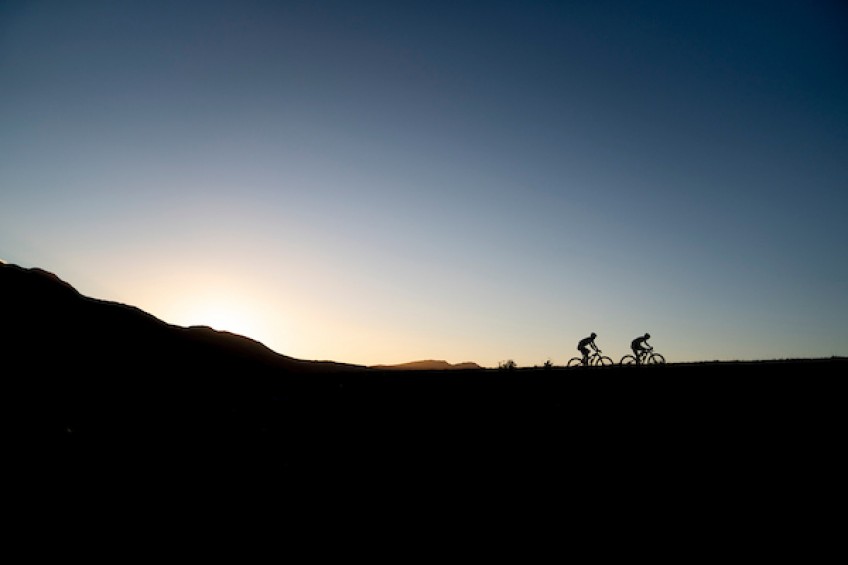 Five days down, three to go on the world’s toughest mountain bike stage race as the Absa Cape Epic rolls steadily back towards Cape Town, in the race they called The Untamed African Mountain Bike Race.

The event has been both cruel and kind to the New Zealanders on event, with a mix of bad luck and good fortune following the Kiwi’s on this 625km journey that takes in more than 15,000m of vertical climbing metres.

Two-time Commonwealth Games medalist and former U23 World Cross Country Champion, Sam Gaze was carrying the hopes of his nation at the start of the week, partnering defending champion Jaroslav Kulhavy (CZE) in the Investec Songo Specialized team. No Kiwi has ever won the overall event and that stat lives on for another year, with Gaze forced to retire after a bad crash on Stage 1 left him with shoulder injury and a possible concussion.

Of the amateur riders, Alexander Donaldson is facing a huge challenge, the Kiwi rider is chasing membership of an exclusive club, with riders completing the Swiss Epic (Switzerland), the Pioneer (New Zealand) and the Absa Cape Epic (South Africa) being presented with Epic Legend medals, highlighting their completion of all three Epic Series events.

The UK based systems analyst will have to ride to the finish solo though, after his South African partner Gavin Ryan was undone by a loose rock on the infamous descent off Groenlandberg, the mountain looming large above the Elgin Valley that has hosted riders for three days.

“Gavin was in hospital overnight and we heard that he has multiple fractures in his clavicle, so they are likely to operate today. I will check up on him today when we get back and see how he is doing. He told me to carry on, the main thing yesterday when he came down was to comfort him and be there for him. There was not a lot we could do other than get help and look after him,” said a still downcast Donaldson.

Donaldson has not lost sight of that Legend Medal that awaits if he can safely negotiate the final three days into the finish line at Val De Vie in Paarl on Sunday.

“It would be nice to finish the Epic and grab that kudos, I would be happy to do that with a bit of pride.”

Central Otago pairing Shaun Portegys and Tim O’Leary came to the Epic as Grand Masters champions of The Pioneer and rode the first three days well in contention but were derailed by a mechanical issue on Stage 3 that cost them close to an hour and drop down the overall GC.

The recovery today was impressive though, with Team Progressive Livestock ending the day in 5th place on GC, a very manageable 28 minutes off the podium, knowing that any bad luck that might befall other teams will see them right back in the mix.

Ex-pat Kiwi now living in Cairns, Peter Craig and his Aussie team mate Mark Knowles continue to ride with smiles on their faces and determination in their legs, also in the Grand Master (both riders 50+) category, the ‘Seeded Wheels’ combination are having a blast and for Craig, he is using his three previous visits to the Epic to good advantage, guiding Knowles through the arduous week.

And the incredible story of Kylie Burrows continues to capture the imagination back in New Zealand and here on event at the Epic. Her courage and determination has never been highlighted more than in her fight with breast cancer in 2017/18, but is further underlined by her return to the bike and conquering of another Pioneer, the Swiss Epic and this week she hopes the Absa Cape Epic, to also receive her Epic Legend Medal.

Burrows and Sarah Kaehler are riding superbly, finishing today’s time trial in 2:52 to sit in 11th place on GC in the Women’s category. But without question, the end goal for both is the finish line on Sunday, preferably in one piece, with the Epic Legend medal a huge motivation for both riders.

“It is and we are going to try and get Sarah there next year if our wonderful Cable Logging supporters give us some more funds we might get there,” said Burrows. “My brother and his wife and their business partners help us out, they put money towards entry fees and stuff and help us along the way, it is amazing, we couldn’t do it without them.

“There are not so many female teams here, but we are getting great support from the men around us, they are always encouraging and telling us we can do it, they know us and are yelling at us, so that has been good, we are being spoilt by them.”

Keep an eye out for the Kiwis as they take on the Absa Cape-Epic over the remaining three days of the event. Links to news, results and live streaming of the entire race can be found by downloading the event App: EPIC SERIES, or online at www.cape-epic.com

Riders can experience the same thrill and ride at the Absa Cape Epic 2020, with guaranteed entries up for grabs at the 2019 Pioneer, to be held 1st to the 6th December. Category winners and lottery winners earn guaranteed starts at the Cape Epic, enter now for the 2019 Pioneer at www.thepioneer.co.nz