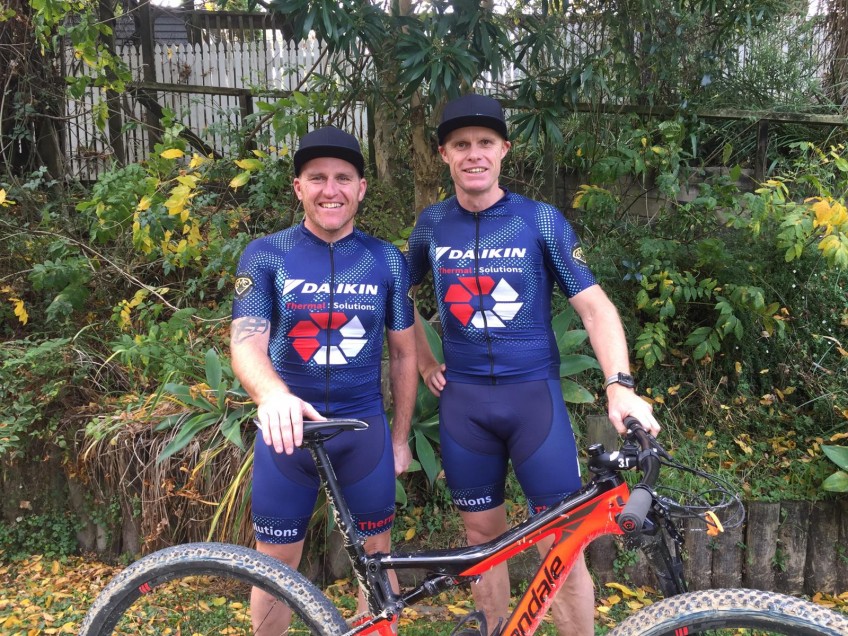 Commonwealth Games medal winning cyclist Gordon McCauley has turned to the ‘other-side’, confirming his entry along with teammate Jarrod Harris in team Daikin Thermal Solutions for the 2019 Pioneer Mountain Bike Stage Race, fuelled by Nutri-Grain, and already the colourful rider is promising to spice up an already demanding week.

A decorated road cyclist, McCauley is the only rider to have won all big three New Zealand Road (5 titles), Time Trial (3 titles) and Criterium titles, he is a two-time winner and record 23-time starter at the Tour of Southland and won bronze in the time trial at the 2006 Commonwealth Games.

Throughout that stellar career, McCauley was never known to be a shrinking violet. Little has changed in that regard as the 47-year-old contemplates an event that has the spark back in his eye and a warning to other teams chasing podium honours in the men’s masters (both riders 40-plus) category at the world renowned six-day mountain bike stage race.

“Whether Jarryd likes it or not, we are going to The Pioneer to win the Masters, and finish top ten overall. And hey, we might end up 30th and have a tough week, but you have to set the bar high, I am a bike racer and so is Jarrod. He hasn’t been racing on the road for that long but at Taupo Cycle Challenge this year there were three of us left together at the finish in open grade and we are trying to chop each other off at the wheel to get to the line first – I won that sprint by the way…

“We want to win the master’s and qualify for Cape Epic. We have huge respect for those leading master’s teams, we understand how good the teams are, some are basically riding as pro’s. We might not win it, but we are coming to take them on for sure and get a spot in South Africa.”

Of course, if you are going to talk things up, you better be prepared to back it up with action, and McCauley has never had any concerns in that department, and along with winning comes a reputation for toughness matched by few riders of recent generations.

What does it take then to partner a man who once put himself through a fence at full-speed at the 2014 Hub Tour, breaking both legs and defying all the medical timelines to get back on the bike and ride while held together by steel pins and rods?

“If I knew him any better, I probably wouldn’t do it,” says Harris. “Anyone that knows Gordy, and the list is pretty long, I think I was about number 35 of those he asked – everyone else said no, get stuffed!

McCauley has no concerns about the partnership and their ability to gel.

“We have travelled together and raced in the same event and team on the road and been together at the end of long road races when one is feeling great and the other one is feeling shit and we let each other know.

“We both have different strengths and weaknesses and importantly we both understand what they are. Jarrod’s first ride in Riverhead was his first ever on a cross-country bike and he was flying through the bush and the single track while I was trying to hold on thinking I am going to die.

“We are closely matched on the climbs though and while Jarrod has the edge in skill, I have the better endurance base after 32 years of riding.”

McCauley has already sought out advice from those who are more practiced in riding on the dirt.

“I know Jimmy (course designer and former winner Jimmy Williamson) pretty well and he was the first person I called when I went down and rode Contact Epic this year. I am cocky and confident that we will do well, but I am also aware that at the end of the day I am a road rider having a go at mountain biking, so I need to take as much advice as I can.”

For someone renowned for making every kilometre count and riding on the limit regardless of conditions, it is little surprise that McCauley is not daunted by how tough the Pioneer will be.

“I have been hitting as many long mountain bike races as I can to see what I am like at the end of 100k. Being tougher than anything else I have done is irrelevant to me, a bike race is as tough as you want to make it. The difference for me is the use of the upper body and the constant concentration required.

“What caught me out in my first few events was the fuel needed, the amount you have to eat. On one of those early races I had a race plan of 165 beats and wasn’t going over that and had what I thought was the right amount of fuel in my pockets and was going to change out a camel back at halfway.

“But I had to ask my wife Pam to stay and refuel me every lap, I just didn’t have enough fuel, I had already eaten all my food at halfway and that day went through 10 gels and probably could have done with more!”

McCauley has dabbled with the dirt over the years and couldn’t resist a friendly dig at former road and mountain bike New Zealand rep Kashi Leuchs.

“I have raced Mountain Bikes on and off, I raced a little in England and did a couple of national series races. I actually hold the race record for the Signal Hill event in Dunedin with Kashi Leuchs second fastest, we just won’t mention he was 12 at the time…”

Both McCauley and Harris are comfortable with the mechanical side of the event and will travel with a full support crew.

“I am pretty handy and alright with my hands,” said Harris. “I am a bit more worried about bones breaking than the bike breaking to be fair, and that can be less enjoyable as well.”

To which McCauley replied:

“I will bring some duct tape to fix broken bones, man-up princess…”

Which is probably a good time to reference the charity that Team Daikin Thermal Solutions will ride for at the 2019 Pioneer, as they look to raise money and awareness for St John.

“We are riding for and will have a give a little account for St John, I know they have had to patch me back together more than a few times during my career. I think every single cyclist I know has been looked after by them at some point. I still can’t believe they are not 100% covered by the government, so anything we can do will help,” said McCauley.

One thing is for sure, with the addition of Team Daikin Thermal Solutions, the 2019 Pioneer just got a whole lot more interesting.