AUSSIES THROW THE GAUNTLET DOWN ON LONGEST DAY 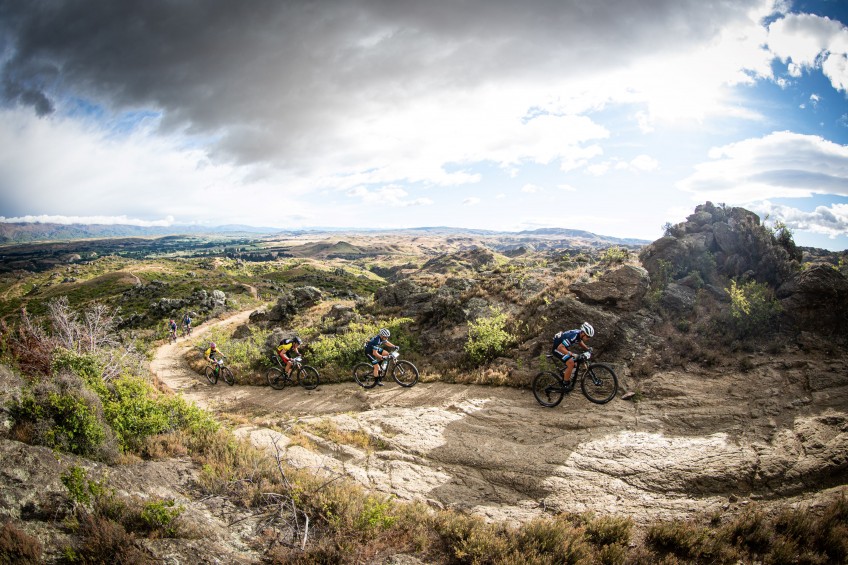 The Australians wrested control of the race back off the Kiwis with a superb ride today, winning the stage by just over three minutes to move 37 seconds clear of Vink and Rush on general classification (GC), with the Kiwi triathlon/XTERRA pair of Ryan Sissons and Sam Osborne on the podium for the first time and in the process moving to third on GC.

The Giant Off-Road Aussies were just too strong today, in conditions that defied the forecast, with predicted rain and high winds almost completely absent from the 112km stage through the immediate surrounds of Alexandra in Central Otago.

“Today we kind of had to take it to them pretty early, our intention wasn’t to drop them but just to put the pressure on them on the bits that suited us which was probably the early single track,” said Johnston. “But we just opened up a gap on the first climb and kind of went on with it and pushed on and broke the pack up and had five minutes at one point. From there we had to conserve until we got to the final climb which we were looking at all day.”

Odams said the course challenged them in more ways than one today.

“After the last climb across the top to the last feed zone it felt like 50k an hour headwinds, with some rain and the long grass, after a real steep climb there was some soul searching out there and then there was a quite hairy descent to finish you off so if the climb and the headwind hadn’t finished you off, then that descent probably will.”

Johnston did take in some of the incredible views on offer while on the climbs and across the top of the trails.

“Most of the climbing is pretty slow so you can look around and see how dramatic the scenery is, most of the looking was up to be honest trying to find the top of the climb, but it was spectacular riding today.”

It will be the turn of Rush and Vink to do a little thinking overnight as to their approach tomorrow and for the remainder of the week, but with the margin at just 37 seconds, you know there are more twists and turns in this fascinating race yet.

It was otherwise a day of consolidation in the open women’s and mixed categories, with Stonewood Homes (Kate McIlroy and Amy Hollamby) continuing their dominance of the women’s field, winning the stage in 5:35:30, some 39 minutes ahead of 2017 champions Nina McVicar and Reta Trotman (New World St Martins).

Perhaps the most impressive ride of the day came from Jo Skerman and Josie Wilcox (JoJo), who overcame an early challenge from Australia’s Holly Harris and Michael Harris (SRAM MTOSS) to win the stage and extend their GC lead to 18 minutes over Kate Fluker and Mark Williams (New World Pivot) who held on for third today behind the Harris siblings, who now sit just seven minutes behind the Queenstown pair of Fluker and Williams.

“What plan?” joked Skerman when asked about the stage going to plan. “You really just head out and see how you are feeling, but respect to Michael and Holly for laying down the challenge today and pushed pretty hard right from the start and got a good lead and we had to be patient. Josie had a few moments early on, but she found her legs about halfway through and we managed to pull them in and rode steady all the way home and had a good finish really.”

While the winners were home in and around the five-hour mark, many more were on their bikes for the best part of the day as they took on and conquered the Queen Stage on the 2019 event. The good news for riders is the event is now heading home, with three of the six days complete and the finish line in Frankton getting ever closer on Friday.

Riders spend tonight in Alexandra at the tent city and event village at Molyneux Park. Tomorrow’s stage takes riders 80km from Alexandra to Bannockburn, with the highlights including a rare chance to ride over the top of the Clyde Dam and a loop through the streets of the historic township. Riders then camp at a new event village for the final two overnight stays before arriving back in Queenstown on Friday. Riders will depart from Molyneux Park at 8:30am, with the leaders expected to finish the stage in approx. three and a half hours. The final stage on Friday takes riders to the finish line village on the ridge off Hawthorn Drive, overlooking the Kawarau River and the Remarkables.

Countries represented in the 2019 Pioneer, fuelled by Nutri-Grain