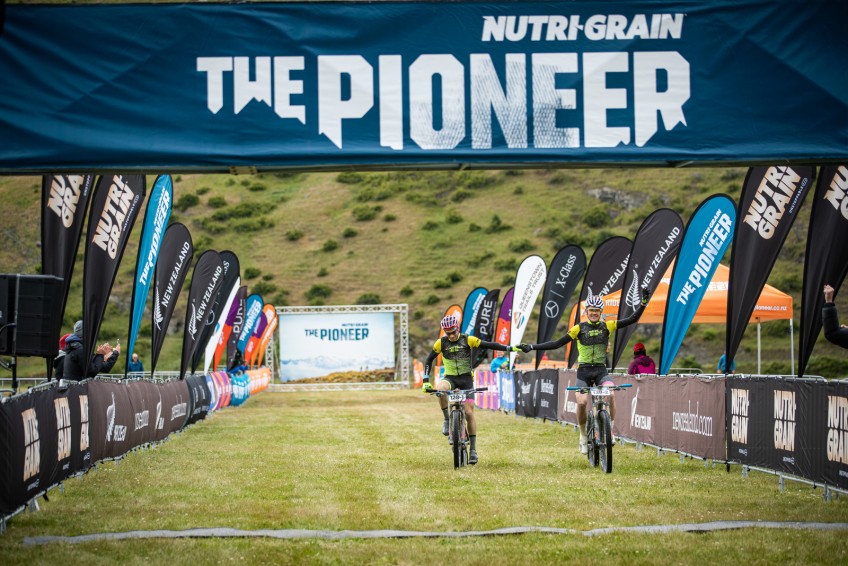 It was multiple back to back success stories at The Pioneer, fuelled by Nutri-Grain, with Michal Vink and Tim Rush (Onya Bike North Otago), Kate McIlroy and Amy Hollamby (Stonewood Homes) and Josie Wilcox and Joe Skerman (JoJo) taking out the open men’s, open women’s and mixed categories for 2019, as the race wound up with one of the event’s toughest stages in its history today.

After a weather disrupted week, riders were greeted with the news that the final stage from Bannockburn to Frankton would take place in its entirety, with a staggering 2,130 of vertical climbing metres crammed into the 70km journey over the Nevis Range on the West side of the Kawarau Gorge, a stage never before ridden in the four year history of the event that took riders through back country Central Otago that few have ever set foot in, let alone those riding mountain bikes.

Rush and Vink were supreme over the second half of the week, winning the stage again today to repel the strong challenge of Brendan Johnston and Jon Odams (Giant Australia Off-Road) by just under 15 minutes on general classification, with Ryan Sissons and Sam Osborne (Winger Hamilton) rounding out the podium with fourth on the stage today.

“That means a lot, I had a lot of pressure coming and a lot of people wrote us off with the Aussie boys coming over, especially as they have won so many races,” said Rush. “That is good for me and Vinky to get this one in our home nation, it has been amazing. Thanks to all the supporters, marshals and volunteers on course, we tried to thank them all as per my mother’s instructions, but it was tough for me at times breathing through a straw behind Vinky.”

Vink paid credit to his teammate and the nature of the final stage.

“Tim was incredible all week and I suffered the first few days so I know what he has put into it and the way he has suffered in the weeks leading up to this to be in the condition to be competitive, he deserved to win this and I was motivated to finish it off for him.

“That was beautiful it was nice to have a classic pioneer stage today, one of those back-country climbs with almost unmarked tracks, quite rough but stunning scenery and just a beautiful place in the world to race a bike.”

Johnston cut an exhausted figure at the finish line, after one of the toughest riding weeks he has ever faced.

“It has been a challenge for sure, today particularly, Jon and I rode pretty well up the first climb but from then suffered a bit, that was a big day. We had a couple of flashes of brilliance early in the week and then held on for the rest of it. Michael and Tim were super strong.”

The Winger Hamilton team knew endurance would test them in the end, with Osborne coming from an XTERRA background and Sissons ITU triathlon racing. That proved the case today but did not dampen Osborne’s enjoyment of his first Pioneer.

“I have loved every minute of it, even that suffering today and boy, did we suffer. I was probably the opposite of Ryan today, that first hour and a half I was in a world of hurt over the top, for some reason I came good and was keen to ride down the Giant boys. I got a split and it was only 25 seconds, but Ryan was not keen to come with me, he looked at me and said ‘these legs are no good’.

“It has been an amazing week, everything we thought it would be and so much more. It has been a bucket list race, we have talked about this since the second year, now we finally have we have the bug and already we are throwing ideas around about next year.”

McIlroy and Hollamby were supreme in taking out the women’s category for a second year, winning all six days of racing and the overall title by over two hours from 2017 champions Nina McVicar and Reta Trotman (New World St Martins) and Hannah Buchanan and Sarah Gilbert (Tike Wine and Vineyards).

McIlroy reflected on one of the toughest days in the history of the event.

“That was a big, big day today, I think when we thought we had reached the top we still had a climb to go, it was raining and cold and we were in the middle of nowhere basically. We were happy to see that second aid station when we knew it was the end of the climbing and only had the river trail to go.”

Hollamby said the temptation of the passing wineries through the Gibbston Valley was very real.

“We did joke about stopping and getting a photo of a bottle of red and sending it through to the finish.”

The mixed category promised to be one to watch and so it proved throughout the week, with Joe Skerman and Josie Wilcox winning back to back titles, but not without a fight as nearest rivals Holly and Michael Harris (SRAM MToss Australia) took it to them on today’s final stage. But while the Aussies won the stage by almost ten minutes, the Kiwis had enough up their sleeves to win the overall race by just under 14 minutes.

“That was very tough for Joe today, he was in some very, very dark places for a long time. The last 10k felt like a marathon but I am super-proud of him today, he dug super deep today and this week,” said Wilcox.

“This will be sweet, we had to work very hard to get home, I was suffering from the start really, but Josie supported me all the way and we got there, I am really proud,” said Skerman.

The men’s masters race also went to the wire, with Gene Marsh and Jeremy Forlong (Off The Chain, NZL) riding superbly on the final two days, winning today to confirm their victory over fellow Kiwis Kris Snow and Hamish Lane (Cycle Obsession) and previous leaders Anthony Chapman and Andy Hagan (Optimal Performance), with Chapman incredibly riding the week with a fractured thumb.

Kath Kelly and Peg Leyland (Earnscleugh Express) simply rode away with the women’s masters category, winning every stage to establish an amazing two hours and 42 minute margin over the Outlaw Sisters of Jackie Blay and Sara Prince, with Kim Johnston and Christine Wright (Cycleways) in third.

The Swiss combination of Marc Baechli and Daniel Christen were similarly dominant, taking out every stage to defeat the founding rider pair of Kent Wilson and Graeme Young (The Hub Cycle Centre) by 55 minutes on GC, with Allan Killick and Greg Thompson (Cycleways) in third overall.

The final stage today was a fitting one for the final Pioneer, fuelled by Nutri-Grain in Central Otago, with the event confirmed for a move to Rotorua in November 2020. The climbs were demanding, the descents thrilling and at times scary on the loose and wet surface from recent rain, but the scenery was truly stunning as Pioneer entrants rode beyond, found character and enjoyed the welcome of their hosts in the Central Otago for one final time.

Riders will celebrate the week at the final presentation dinner at the Queenstown Events Centre tonight, before heading home or for many, staying on to enjoy the Central Otago region for a few days – no doubt without their bikes!