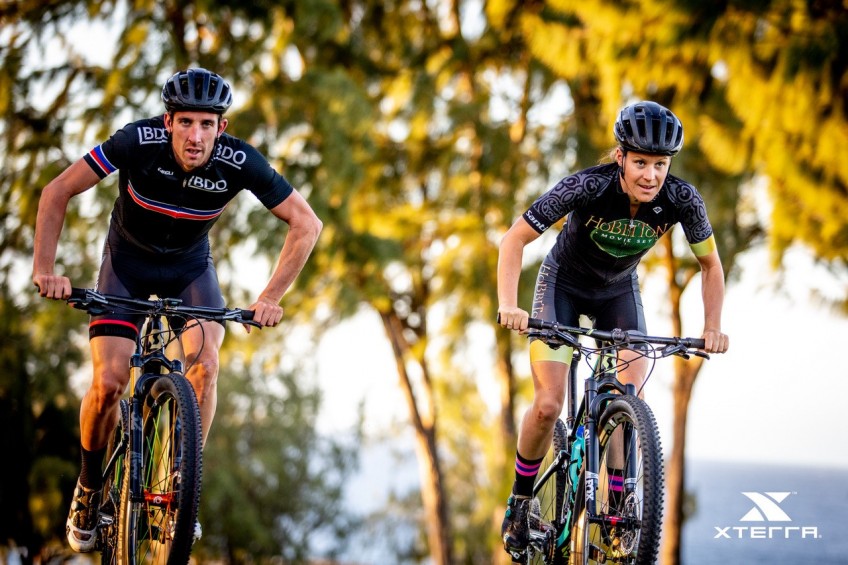 New Zealand’s very own prince and princess of XTERRA and off-road triathlon racing are set to grace the iconic Macpac Motatapu multi-sport event for the first time, with Sam Osborne and Samantha Kingsford lining up in the off-road triathlon as they chase the Suzuki New Zealand Cross Triathlon National Championship titles on offer on March 14 in Central Otago.

Osborne (Rotorua) is a former ITU triathlete who is now established amongst the elite of off-road racing, winning six times on the XTERRA tour in 2019, winning the Pan American Tour, finishing 4th at the World Championships in Maui and riding with good mate Ryan Sissons to third at The Pioneer, fueled by Nutri-Grain.

His partner Kingsford is a more recent recruit to the pro circuit, giving up on her fulltime PE teacher’s job in 2018 to travel and race alongside Osborne, a move that has seen quick success as she too won the Pan American title and three races in 2019.

Osborne is now very much at home in the dirt, much preferring the variety of race conditions to his days in ITU racing.

“Triathlon is a bit of an art to get all three disciplines going well at the same time and XTERRA takes that to another level, one week you’ll be navigating rock gardens in Canada and the next round is riding up mountains in Utah. To me that’s a fair bit more exciting than doing 10 loops of 4k through a city.”

Perhaps surprisingly given their shared passion for off-road racing, both Osborne and Kingsford will debut at Macpac Motatapu in the off-road triathlon next month and can’t wait to see the course for the first time.

“I’m excited to be racing in a beautiful part of New Zealand,” said Kingsford. “This race will be a bit different to what I am used to with a longer mountain bike leg than normal. I have heard some amazing things about Motatapu, so I am really excited to come and race.  It will also be a good opportunity to see where my fitness is at for my upcoming season.”

Osborne is equally enthused about a first appearance and with his trademark sense of humour referenced a not so great moment on the Pioneer (last December) that he might be looking to atone for.

“Motatapu is an iconic event, as long as I’ve been racing off-road I’ve heard so much about it. It’s a beautiful part of NZ and a new race for me so that’s always exciting. I believe it doubles up some of stage one from Pioneer, if that is the case there is a stream crossing there that I would like to make peace with.”

An added bonus this year is that Macpac Motatapu doubles as the official Suzuki Triathlon New Zealand Cross Triathlon National Championships, adding another layer to an event that has previously been won by the likes of Dougal Allan, Braden Currie, Nicky Samuels and Simone Maier.

You would struggle to find a more quintessential down to earth Kiwi couple, with Osborne offering an almost embarrassed acceptance of the title ‘best off-road racing couple on the planet’.

“I have never thought of it like that but based off last year I think we could claim it. Between us we enjoyed nine World Tour wins and were the male and female Pan- American Tour winners, so yeah, last year was a big year for us.

“It is really special to both get it right on the same day and share I guess that ‘moment.’ A lot goes into trying to perform consistently and three times last year we both managed to get it to happen on the same day. I have even more reason to be proud of that as not a lot probably know, but I also coach Samantha, so it’s nice to get that side of it right as well.”

Osborne says having each other to lean on, to share the highs and lows of racing, travel and training is a key to their recent success.

“I did a lot of years solo going to Europe and racing, and there were some particularly tough times alone trying to make this triathlon thing work. It is the nature of the beast that stuff always goes wrong at some stage when you’re travelling, and it certainly makes it nicer to have someone else there to help diffuse the issues.

“It’s nice to share the same passion, I enjoy the travelling, racing, hard miles and its cool to share that with someone who also enjoys it. Samantha has definitely got me into seeing a bit more of the places we go instead of being the boring athlete who sees nothing but hotel rooms and race-courses!”

The timing is good for both, with Osborne keen to enjoy a strong hit-out as the XTERRA season approaches, starting in Rotorua in April.

“I will come off a big base block and it should kick me into gear. I really like the idea of revving the engine before a targeted race, for me that next one is XTERRA Rotorua. There’s nothing quite like race intensity you can never hit quite the same level in training. And there’s the fact that just training all the time gets a bit boring, for me racing is the fun part.”

And both are hoping a successful outing at Macpac Motatapu will launch them into even bigger years on the international stage in 2020.

“Last year was a pretty big year for me I won six XTERRA World Tour races, the Pan American Tour and Championship race. I want to go back and try to defend those titles. I’m going for two Continental Tours in the same year which no one has pulled off before. I have won the Asia-Pacific and Pan- American Tours in separate years but to both in the same would be pretty special.

“The World Championship at Maui is the big one though, I was fourth last year and third in 2018, those results leave me hungry for that top step on the podium.”

Kingsford is also ready to perform at an even higher level in 2020, with last year’s success and experience behind her.

“My goals are still very similar to last year when I wanted to have consistent performances and results, and this year is no different. My success from last gave me a lot more confidence in my racing however, and I learnt a lot about racing.

“With Sam and I heading back to race the Pan American Tour I would love to defend my tour title and defend the race victories too.  I really enjoyed the style of racing over there and I think the courses suited me a lot more than Europe.”

The Off-Road Triathlon takes place on Saturday of the two-day multi-sport festival, with athletes swimming 2km in Lake Wanaka before riding the mountain bike event course from Glendhu to Arrowtown and finishing with the 8.5km Sawpit Trail track back to the finish line at Wilcox Green.

Macpac Motatapu
March 14/15, 2020
Entries open for all events at www.motatapu.com