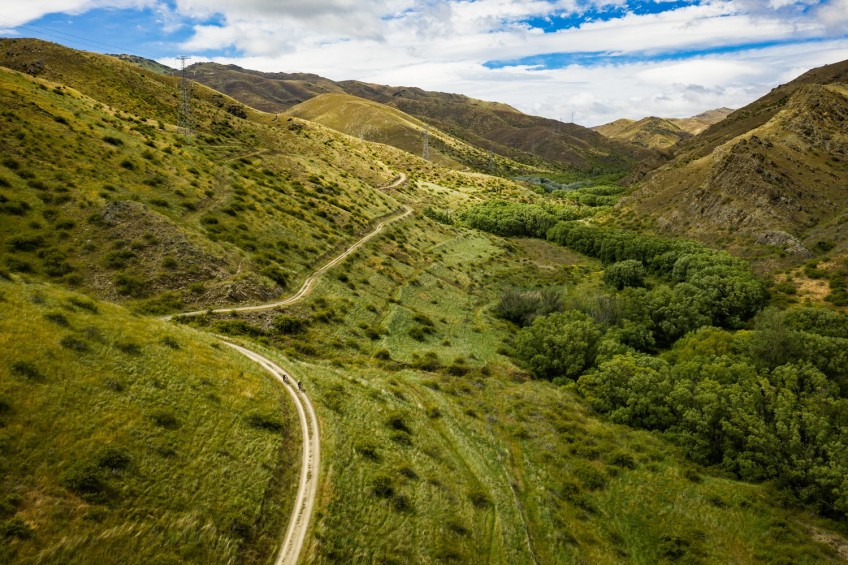 Race organisers were kept on their toes as two course changes were made this morning as riders headed out on stage four of The Pioneer, fuelled by Nutri-Grain, with snow, high wind and yesterday’s rain all impacting on the Bannockburn loop course.

The weather front saw the climb over Carrick Range removed before the race start, with snow and high wind making it impossible for riders to negotiate safely, with the ride up Mt Difficulty then also removed as the weather deteriorated further and temperatures plummeted to minus 3 degrees across the top of the climb, with rider welfare paramount for organisers.

The end result was one of the fastest stages in the history of the six-day mountain bike race, covering 61km with approximately 1,182 metres of climbing, with riders taking in two laps of the Hawksburn - Pylon Track Road, starting and finishing at the Anderson Farm in Bannockburn.

Michael Vink and Tim Rush (Onya Bike North Otago) made light of the changes, with the two ‘roadies’ breaking clear early on lap two to win the stage by almost four minutes and in the process put one hand back on the trophy they won in 2018, with their lead on general classification (GC) now out to 8:53 over Giant Australia Off-Road Team of Brendan Johnston and Jon Odams.

“I don’t think it made a difference to the result, but the gaps might be a little closer than they otherwise would have been but I think everyone enjoys those shorter days, it is a bit closer times and more competitive racing which is always good, so in the end it was a really nice stage,” said Vink.

Rush was quick to point out the change from the start of the week when he was strong and Vink did not have his riding legs.

“We made a break up the second climb on the second lap, Vinky put the hurt on and it split pretty easily and I was just a passenger basically and held on,” said Rush. “He (Vink) was a machine today and he was next level, I was going backwards, and he was going forwards, I am pleased we are done tomorrow.”

The Aussies gave all they had today, but just did not have the big climb they needed to try and put a dent into the powerful Kiwis. Odams is not optimistic of a challenge tomorrow but has not given up all hope.

“We will see how we are going; I think there might be a couple more course changes coming up but I can’t imagine it will be more than about a couple of percent single track. If it was maybe 90% single track we might be able to bring it back, but this is a different race to what we are used to. I am more suited to single track than the big long climbs, Vink and Rush are just absolute motors on those big open climbs. Trekky (Johnston) can likely sit with them on those climbs, but I just don’t have the motor for that.”

Ryan Sissons and Sam Osborne (Winger Hamilton) continue to impress, finishing in third place again on the stage today to sit comfortably in third on the overall standings, with Osborne loving his first Pioneer experience.

In the women’s categories it was Kate McIlroy and Amy Hollamby (Stonewood Homes) and Kath Kelly and Peg Leyland (Earnscleugh Express) maintaining their 100% stage winning record in the open and masters (40+) women’s categories respectively. Both teams have dominated their rivals throughout the week and barring a major incident, should ride comfortably to victory into Frankton tomorrow.

McIlroy was in no doubt that organisers had made the right decision to shorten the stage.

“No doubt they made the right call, we got the news at the first aid station and while we were maybe thinking we could do the climb and prepared for it, it was already cold out on course as it was. Then we then started lapping some of the slower riders and realized just how much effort they were putting in to their ride and that it wasn’t just about us, they are amazing in what they are doing, but going over the top in those conditions today, no way.”

The mixed category also appears a done deal, barring a mechanical on tomorrow’s final ride into Frankton, with defending champions Josie Wilcox and Joe Skerman (Team JoJo) responding to the shock of yesterday’s stage defeat to win by almost 90 seconds from Michael and Holly Harris (Sram MToss), extending their GC lead to almost 24 minutes with just one day to ride.

The men’s masters is quite the race though, with today’s stage winners Gene Marsh and Jeremy Forlong (Off The Chain) surging into the GC lead, but with a margin of just one minute 22 seconds over Anthony Chapman and Andy Hagan (Optimal Performance) the race is well and truly on for tomorrow’s final stage.

And while they are out of GC contention, 23-time Tour of Southland legend Gordon McCauley and Jarrod Harris (Daikin Thermal Solutions) are getting stronger as the week goes on, riding through from start zone B today to jump on the stage podium in third for the first time this week.

“We decied to go blocks again and try to catch as many group one teams as we could. We opened up a gap straight away with Team Blueblokes and got into our work. I had a super bad patch through the 30k mark, but Jarrod has learned to decipher my sweary, tired ramblings and nursed me through it.

“There is certainly a different vibe at these events, once the racing stops it is all smiles and high fives even if you have been battling all day,” said McCauley.

The grand masters men’s race (50+) continues to be dominated by Swiss visitors Marc Baechli and Daniel Christen, with another stage win today extending their lead in the GC to 47 minutes, they too look like crowning their week as champions in Queenstown tomorrow.

Riders spend their last night in the event village at Bannockburn tonight, knowing that for many the comfort of a hotel or air bnb awaits on return to Queenstown tomorrow. Organisers are reviewing the final stage given the recent rain and high river levels in Queenstown, with details of the stage to be revealed to riders at tonight’s presentations.