VINK AND RUSH GO TO WORK IN THE MUD AND RAIN 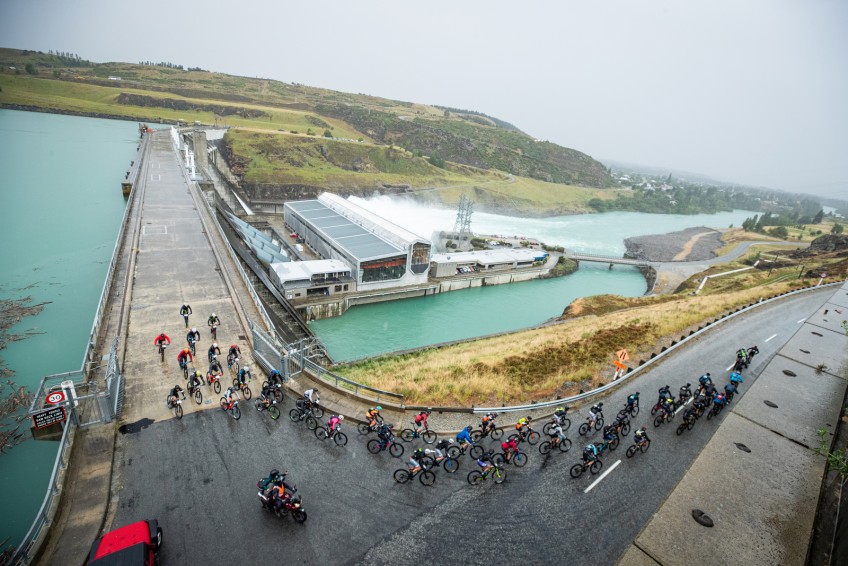 Riders overcame the worst the weather could throw at them on stage three of The Pioneer, fuelled by Nutri-Grain, as constant rain and cool temperatures were the order of the day on the ride from Alexandra to Bannockburn in the stunning Central Otago basin.

With the forecast rain from the big West Coast storm finally hitting this morning, reducing temperatures to near freezing on the tops of the ranges, organisers quickly implemented a contingency course, taking out the climb over Cairnmuir Range and reducing the overall distance on the stage to a more manageable and yet still testing 60km, with 1200m of climbing.

It was Michael Vink and Tim Rush (Onya Bike North Otago) who best managed the conditions to win the stage and in the process grab back the leaders jerseys that have now swapped hands every day of the event, with Brendan Johnston and Jon Odams (Giant Australia Off-Road) dropping five minutes on the stage to fall 5:09 back on general classification.

Despite the win, a mud-covered Rush had struggled with the cold conditions and for the first time this week, relied heavily on his teammate Michael Vink, who was perhaps channeling some of his Tour of Southland wet weather experience to lead them to the line.

“That was brutal, I suffered bad today, Michael was next level and really gave me a push, a couple of pushes really, that was so cold and brutal.”

Vink by contrast was buzzing and glad to have finally found his riding legs.

“It is all about who has recovered best and who has the most in the tank today, it was only two hours today if anything that is a bit short for us, but we recovered really well and rode within ourselves and rode with confidence and had a plan and it worked out.

“We went from the first climb, it was pretty much a time trial from that first climb all the way to the finish over 40k, I have a few jerseys for racing over 40k in my closet so that is something that usually suits me well. I was pretty motivated not be a ball and chain around Tim’s ankle anymore so that was great that we could ride as a team today.”

Vink had also for the first time this week reverted to his more typical lycra race suit, ditching the traditional mountain bike baggie shorts. He suggested it might be a twist on the usual boxing phrase to suggest this race is all on now….

“I guess you could say the baggies are off.”

Third across the line for the second day running was the Team Winger team of Ryan Sissons and Sam Osborne, with Sissons coping well thanks to good preparation.

“That was all about wearing the right gear and to be honest, I didn’t find it too bad. They key was having a couple of layers on and the wet weather jacket did a great job of keeping the cold weather off the chest, but that was so much fun.”

Osborne concurred, with the XTERRA star in his element.

“I just loved that, what a great stage, so much fun to ride in. It brought a new element of bike handling in, but that was a great ride.”

The others to perhaps surprisingly make a move in the wet were Holly Harris and Michael Harris (SRAM MToss), adding a third name to the list of stage winners in the mixed category as the Aussies powered their way to an impressive win and moved to second on GC, ahead of two-time winners Mark Williams and Kate Fluker (New World-Pivot).

Holly was all smiles through the mud and rain at the finish.

“Usually we are terrible in the mud, but on the start line I had this weird thing when I thought, I actually like the rain, so I decided to enjoy it and I did. The creeks are so cold, there are ruts full of mud, it was crazy but so much fun!, said Holly.”

Her brother Michael described the moment when they made their break on overall category leaders Josie Wilcox and Joe Skerman (JoJo).

“We made our move on the first climb, Josie was with us but Joe (Skerman) wasn’t and Josie had to wait for Joe so couldn’t go with us. After that we had a good group and we didn’t see them again.”

Kate McIlroy and Amy Hollamby continue to dominate the women’s race, taking out a fourth stage win to extend their lead on GC to an incredible and likely insurmountable one hour and 42 minutes.

It is a similar story in the master’s women’s category, with defending champions and local residents Peg Leyland and Kath Kelly (Earnscleugh Express) in a different league to the other teams, also keeping their 100% stage win record intact to now lead by just under two hours.

The men’s master’s is proving to be one of the more competitive categories, with the stage won by Anthony Chapman and Antony Hagan (NZL, Optimal Performance) but their GC lead is a relatively tenuous six minutes with two days still to ride.

Swiss visitors Marc Baechli and Daniel Christen are loving every moment of their Pioneer, winning another stage and now lead on GC by 41 minutes from Kiwis Kent Wilson and Graeme Young (The Hub Cycle Centre).

Another to revel in the tough conditions was road legend Gordon McCauley, he and Daikin Thermal Solutions riding partner Jarrod Harris made up big time and jumped to fifth in the masters (40+) category, with McCauley using all his extensive experience on the Tour of Southland to prepare for today.

“We just attacked that today, every chance we got we put others around us into difficultly, we knew the course was going to be stop start with a few of the fence and river crossings, so after each we would essentially sprint and over the course of the stage, we broke a few teams and rode through plenty I reckon, that was great.”

Once over the line, riders tucked into welcome hot cups of tea, coffee and milo and got into the hot showers at the Bannockburn site on Anderson’s farm, before settling into the social zone under the cover of the stretch tents, listening to some great music on the sound system, enjoying each other’s company and sharing a few stories of one of the more amazing stages in the history of The Pioneer.

Riders spend tonight in the event village at Bannockburn, preparing for tomorrow’s (Thursday) 69km Bannockburn Loop stage. Riders will depart from the start line at Anderson’s Farm in Bannockburn at 8am, with the first riders expected back at the finish line at the same location at approximately 11am. The final stage on Friday takes riders to the finish line village on the ridge off Hawthorn Drive, overlooking the Kawarau River and the Remarkables.